An increase in the number of Space Coast launches this year is expected to drastically increase the number of launch tourism visitors to Brevard. Florida Today

When the space shuttle program was just taking off in the early 1980s, so was Dixie Crossroads Seafood Restaurant in Titusville.

When people traveling to the Space Coast for a launch saw those stories that mentioned Dixie Crossroads and its signature rock shrimp, they wanted to check out the restaurant, too.

“That’s literally how we became ‘world-famous,’ ” Thompson said, alluding to the restaurant’s slogan. 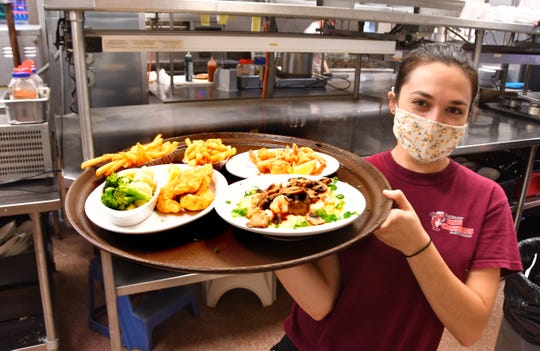 Alesha York takes an order out of the kitchen at Dixie Crossroads Seafood Restaurant in Titusville, a popular dining spot for people visiting the Space Coast for a launch. (Photo: MALCOLM DENEMARK/FLORIDA TODAY)

More: Spring break visitors starting to return to Brevard, but not in pre-pandemic numbers

As another generation of astronauts launches from the Space Coast — now on SpaceX rockets — Thompson is seeing a resurgence of revenue tied to the space program. And so are other local businesses, ranging from hotels to gas stations.

Space Coast Office of Tourism Executive Director Peter Cranis said an estimated 220,000 people from outside the county came to Brevard for the first SpaceX Crew Dragon human spaceflight last May.

Unlike in the shuttle era, the Office of Tourism now can track visitor counts through a sophisticated method of using cellphone signals, and can determine how many of the phones in a particular area are from out of the county. 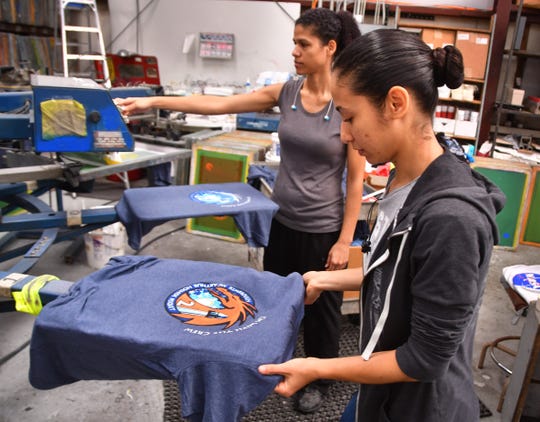 The estimated visitor spending for that launch was $44 million — and that doesn’t count the spending for those who were here for an earlier launch attempt that was scrubbed.

The timing of the next crewed launch is not ideal for tourism —  6:11 a.m. Thursday. But that could encourage more space fans to come into Brevard a day or two earlier, check into a local hotel, and plan to stay through the weekend, in case the first launch attempt is scrubbed. 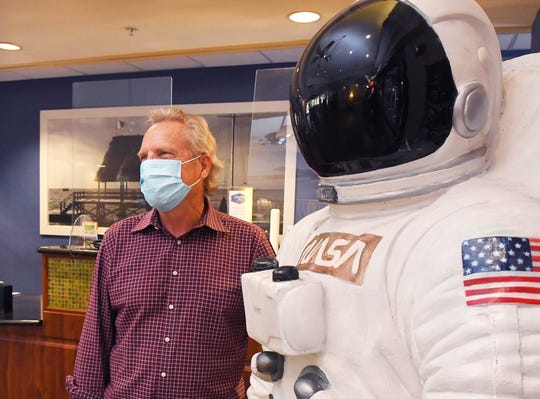 Tom Williamson, president of Cocoa Beach Area Hotel and Lodging Association, stands next to an astronaut mannequin at one of his company’s hotels, the Hampton Inn in Cocoa Beach. Williamson said he expects Thursday’s scheduled SpaceX Crew-2 launch to keep the momentum going for the local tourism industry, after a strong spring break. (Photo: TIM SHORTT/ FLORIDA TODAY)

With the cruise industry shut down in the United States since March 2020 because of the coronavirus pandemic, space launches have boosted the local tourism sector.

In pre-pandemic times, people coming to Port Canaveral for cruises — and staying in the county before or after their cruises — represented about 20% of the Space Coast tourism spending, or an estimated $360 million. The impact of the continuing halt to cruising on tourism is being felt most in the Cape Canaveral and Cocoa Beach area.

But those areas also are the ones that typically gets the biggest boost from space launches, along with Titusville.

Cranis said that, with the increasing cadence of crewed and uncrewed launches — potentially 40 to 50 launches this year — people coming to the Space Coast for a random week of vacation have a pretty good chance of viewing a launch.

If you live on the Space Coast, rocket launches are common sights.

But, if you live in the Northeast or Midwest, “it’s a real bucket-list item for many people,” Cranis said.

Crewed launches are ‘No. 1 draw’

And a launch like Thursday’s scheduled Crew-2 mission, with four astronauts flying ina Crew Dragon capsule to the International Space Station, is extra-special.

“Human spaceflight is a whole other level,” Cranis said. “By far, it’s the No. 1 draw.”

“Whenever you put humans on a rocket, there’s always going to be a tenfold or more increase in the number of people that are coming out to see the launch,” said Don Platt, director of the Florida Institute of Technology’s Spaceport Education Center in Titusville.

“And I’m sure this won’t be any different. Although it is early in the morning. I think that still you’re going to have big crowds,” Platt said. “There is just something about a human launch that just takes it to another level, really.”

Platt said it’s “interesting that this launch has Americans, as well as Japanese and a European, on it. So it’s definitely an international mission to the International Space Station. And, of course, in Florida and here on the Space Coast, we always have lots of international tourists. I know it’s kind of hard now, with COVID and all, but you know there’s definitely an interest from people all around the world on this mission.”

Thursday’s launch will come after a relatively strong spring break period for tourism —  and just days after the weekend’s Cocoa Beach Air Show, which featured the U.S. Air Force Thunderbirds.

Cocoa Beach Mayor Ben Malik said many Cocoa Beach hoteliers were booked up at least through Easter — and he does not see signs that this busy spring break season is letting up.

One factor: Malik said many tourists live in northern states that remain under an array of COVID-19 restrictions.

Cocoa Beach City Manager Jim McKnight said the spring season “has been back to pre-pandemic levels, as far as the number of people we’re seeing, I mean, you can tell by the traffic. You can see the beaches are packed during the week. It looks like a weekend on Wednesday, Thursday and Friday. I walked through the parking garage one day — and I couldn’t believe the number of out-of-state tags I saw.”

Tom Williamson, general manager/partner with Ocean Partners Associates, a company that operates four hotels in Cocoa Beach, attributes the strong spring break period in part to pent-up demand of people who had not traveled in the past year because of the pandemic.

“People were just ready to travel and were ready to do things,” said Williamson, who also is president of the Cocoa Beach Area Hotel and Lodging Association. “When I encounter traffic, I think that’s the greatest thing there is” because it means more visitors are in the area.

Thompson said she has seen the joy of out-to-town visitors at her restaurant.

“It’s like they got out of jail or something,” Thompson said.

Countywide hotel room occupancy was strong in March, peaking at 79.1% the week of March 21, according to data from the hotel tracking company STR Inc.

The strength continued into early April, Cranis said, with average daily room rates — another key economic indicator for the hotel industry — rising to $120.12 the week of April 4, the fifth consecutive weekly increase.

And the Crew-2 launch will help extend gains for the tourism sector, which typically dips in the period after spring break and before summer.

“It’s going to be a boon to business,” Williamson said. “If it wasn’t for the space business, we’d be in worse shape. The whole Brevard economy will benefit from this — no question.” 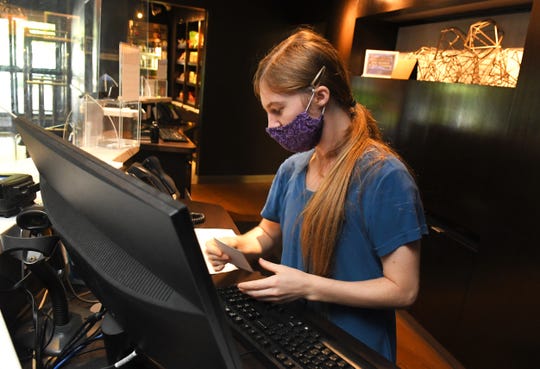 Maria Prange is a front-desk agent at Courtyard by Marriott in Cocoa Beach, one of many beachside hotels that get a boost in business from space launches. (Photo: TIM SHORTT/ FLORIDA TODAY)

Cranis said hotels in the Cocoa Beach/Cape Canaveral area benefit the most. But, as they fill up in the days before a launch, people booking at the last minute will be seeking accommodations on the mainland. And that will help other businesses in those areas, too.

The Office of Tourism spring marketing campaign — in traditional media advertising, online advertising and billboards — has a strong emphasis on space launches, working launch images in conjunction with other things people can do on the Space Coast. Things like going to the beach, going to Brevard Zoo, fishing or taking in an ecotourism adventure.

Not only do tourists come here for a launch and stay in local hotels, but so do space industry employees from other parts of the country who are temporarily on the Space Coast working the launch.

Back in May, health officials warned launch spectators not to gather in crowds for the historic SpaceX Demo-2 launch of American astronauts Bob Behnken and Doug Hurley — the first crewed mission from U.S. soil in nine years.

“When we were still dealing with the beginning of this pandemic, we weren’t sure what was going on,” Malik said. “I think this will be certainly a larger attended event, because so many people have gotten vaccinated at this point.”

The tourism community is looking forward to the Crew-2 launch and other crewed missions in the future.

Noting the added business it brings to her restaurant and other local businesses, Thompson said SpaceX is helping lead a “revival” of the space industry not seen since the end of the space shuttle program in 2011.

Platt said, overall, “businesses, from an economic point of view, are all really still trying to recover from the pandemic. So having an infusion of people come into town for a launch is not a bad thing.”

“I think that any human launch is significant, especially after we had 10 years or so of down time here in the United States — and certainly here on the Space Coast — from not having any human launches,” Platt said. “And there was definitely a perception that NASA was out of business, you know: ‘They canceled NASA.’ This has definitely helped people realize that, no, NASA isn’t canceled. And we’re in sort of a new realm now where there’s a tremendous partnership between NASA and private industry like SpaceX.”

And that’s helping businesses of all kinds.

At the Space Shirts business on Merritt Island, for example, employees were printing souvenir launch T-shirts on Friday. The shirts depict the Crew Dragon Crew-2 mission patch, with the phrase “I’m with the crew” added above the patch.

“We’re rocking now,” Thompson said, with Dixie Crossroads having recovered to pre-pandemic business levels, helped by launches like the one scheduled for Thursday.

If stories like this are important to you, please consider subscribing to FLORIDA TODAY. To subscribe: https://cm.floridatoday.com/specialoffer/